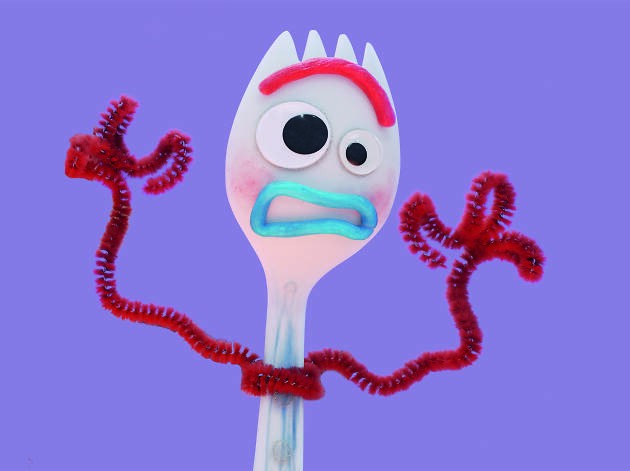 (What ‘Toy Story 4’ can teach us about conference presentations)

I’m a huge fan of Pixar movies, which apart from being immensely entertaining and moving and amongst the most creative films released each year, always contain brilliant messages, multiple layers for kids and adults alike and simply wonderful examples of story-telling.

My favourite of all Pixar movies are the ‘Toy Story’ films. I went to see ‘Toy Story 4’ last month and while I’d argue it’s the 4th best of the 4 films, it’s still damn good and better than the vast majority of animated films released these days.

One thing about Toy Story 4 that I loved was their newest character (and probably the most interesting one in the film) – Forky, a hand-made toy, made on her first day at kindy by the child character Bonnie, the current owner of the Toy Story toy characters. Bonnie literally creates Forky before our eyes from a box of craft accessories – a plastic spork, a pipe cleaner, two mismatched googly eyes and a paddle-pop stick.

He is the most imperfect, rough around the edges and on the face of it, simple of all the toys in the film. Yet Forky is also one of the deepest and most interesting toys in the series. We watch him over the course of movie go through an existential crisis – Who am I? How did I get here? What is my purpose in life?

So, what does all of this have to do with conferences?

I have always maintained that the best conference presenters are the authentic ones. Presenters who are a little raw, rough around the edges, not necessarily the most polished, not always the most articulate. But the most real. In my view as a presentation skills trainer, authenticity trumps polish every time. Present yourself with your endearingly raw human imperfections visible.

Sure you should be well prepared and do some run-through rehearsals, but not too much rehearsal. You always want to sound in the moment, conversational, not like you are reciting a pre-rehearsed script. A little raw, a little rough…….and totally authentic.

No audience is ever going to criticize a presenter for ‘too much authenticity’.

The second thing is simplicity. The hand-made, spartan Forky is the simplest of all characters, on the surface. He is minimalist – exactly how most good presentations should appear. Sure, the content might be complex (Forky is a mass of complex insecurities underneath) but when it is presented, the content should be simple to comprehend. The presenter should do the heavy lifting behind the scenes (remove the jargon, extract the essence of the topic, leave out the extraneous detail) to ensure the audience can easily understand what is being presented. The best presenters have the knack to clearly explain, break down complexity and highlight a few key messages.

Anyone who has seen the Toy Story films (or Inside Out, Wall-E, Finding Nemo, Up or Coco etc) would hopefully agree that those engaging Pixar films might appear simple and childlike on the surface – but below that lies some complex, fascinating, heavy-duty issues.

‘To Infinity and Beyond’.

Andrew Klein is a Presentation and Pitching Skills Speaker and Trainer. He has seen every PIXAR film ever released, many of them multiple times. Like most people, he cried in Toy Story 3…..you know that final scene, when Andy hands over Woody and Buzz to Bonnie……….ahhhh, kills me every time.